Michael Behe and the Biblical "kinds" 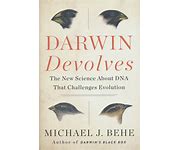 I’ve been tediously trying to read through Michael Behe’s latest book Darwin Devolves. Its main premise is that Darwinian mechanisms do not build genetic information. Instead, biological processes break apart DNA thus possibly creating animals that are more adaptable in the short run but yet, in the long term, less genetically fit and limited in the amount of variation they can produce. I was reading into the book when I discovered even deeper design in living things than I was already aware of.

Near the beginning of chapter two, Behe discusses a group of insects called planthoppers. Young planthoppers have strange bumps in their hind legs, and at one-time scientists did not know what they were. However, a pair of British entomologists, using sophisticated high-speed video equipment, revealed that these bumps are the teeth of gears which enable them to jump. Behe says this “is the first example of a (relatively) large, in-your-face, interacting gear system in an animal.”

After next discussing the putative bad wiring of the vertebrate retina, Behe discusses the fact some migratory birds and other animals can sense the magnetic field of the earth and use it to navigate. Microbiologist Richard Blackmore demonstrated that magnetotactic (try to say that 5 times real fast!) bacteria contain a line of iron-rich particles that act like a magnet when the particles are in a line, and this orients the bacteria with the magnetic field of the earth. Here’s where it gets more complicated. Those bacteria don’t simply ingest minerals that happen to be lying around. They manufacturer the right size and shape of the mineral they need and store it in the correct membrane compartments and attach it in the right spot. All of this, Behe says, “requires sophisticated control mechanisms in the cell to target the right proteins to the right places at the right times throughout changing external circumstances.” Behe goes into more detail on this.

This is no surprise to me as, for a while, I’ve known about machine-like biological mechanisms ever since Behe, back in 1996, discussed the bacterial flagellum as an example of such mechanisms. Since then Jonathan Sarfati has devoted an entire book – By Design – to biological machine-like features. Quoting one or two examples will not suffice here, so I’ll just quote one paragraph from a reviewer on Creation.com.

There are two recurrent themes in this section, apart from the evidence for design itself. One is the acknowledgement by man of the superiority of the design in nature. It has been said that imitation is the sincerest form of flattery, and science is more and more looking to nature to solve its engineering problems and provide new technologies. Even the most committed evolutionist has to acknowledge and admire the wisdom and ingenuity displayed in such incredible design; yet they often ascribe that wisdom to nature itself, rather than to the true Designer. The second theme is the complete inadequacy of evolutionary theory to explain the design present in nature. Many of the design features are irreducibly complex, meaning they could not have arisen through a series of “numerous, successive, slight modifications” over time. Every part had to be in place and fully functional for the whole to work at all. Other biological features exploit the laws of physics in remarkable ways to achieve the desired result, requiring a close correlation between biology and physics. While not specifically stated as such in the book, this implies an intimate knowledge of the fundamental laws of physics that is more consistent with an intelligent designer than blind chance as the only “designer.”[1]

Drawing upon research of the limits to which animals can change, Behe suggests that the family is the animal classification level at which unguided processes no longer can produce different unique animals. He says, “minor random variations around a designed blueprint are possible and can be helpful, but are severely limited in scope. For new basic designs such as those at the biological level of family and above, additional information is necessary, information that is beyond the ability of mindless processes to provide.” (p. 169)

Behe is no fundamentalist Christian as far as I read him, but it’s interesting how what he says matches the Bible’s ideas of “kinds.” An article at creation.com caught my eye where Pete Williams says, citing S. R. Driver, that min (the Hebrew word translated as “kinds” in Genesis) can be interpreted as a collective of a plurality of life-types. Williams cites E. Zorell as claiming min “is a division of a thing into various forms or types”[2]  Oddly, this is just the sort of arrangement Behe seems to be alluding to. Under each family - which seems to be the limit to which  natural selection can change animals into new existing forms - there are multiple different forms possible.
This definition of kinds was discussed by creationist Henry Morris back in the early 1970s.

Even though there may be uncertainty as to what is meant by “kind” (Hebrew min), it is obvious that the word does have a definite and fixed meaning. One “kind” could not transform itself into another “kind.” There is certainly no thought here of an evolutionary continuity of all forms of life, but rather one of definite and distinct categories. Furthermore, the sense of the passage is that a great many different kinds were created in each of the nine major groups (excluding man) that are specifically listed. There is certainly room for variations within each kind, as is obvious from the fact that all the different races and nations of men, with all their wide variety of physical characteristics, are descended from the first man and are therefore all included within the human “kind.” The same must be true for the other kinds. Many different varieties can emerge within the basic framework of each kind, but at the same time such variations can never extend beyond that framework. [3]

I should mention that sometimes evolutionists show they support such conclusions although they would never admit they support Biblical creation. Here is an excerpt from my discussion of evolutionist Stephen Gould from my review of Richard Dawkins at https://thesecularleftcritique.wordpress.com/the-delusional-dawkins-a-review-of-the-greatest-show-on-earth/

Gould seems to understand these limits. He says that “few systems are more resistant to basic change than the strongly differentiated, highly specified, complex adults of ‘higher’ animal groups.” How could you ever, for instance, convert an adult rhinoceros or a mosquito into something different, he asks. Yet, he says, transitions between major groups of animals have happened. To show the vanity of such a search for transitions, Gould quotes classical scholar D’Arcy Wentworth Thompson as saying

An algebraic curve has its fundamental formula, which defines the family to which it belongs. . . . We never think of “transforming” a helicoid into an ellipsoid, or a circle into a frequency curve. So it is with the forms of animals. We cannot transform an invertebrate into a vertebrate, nor a coelenterate into a worm, by any simple and legitimate deformation. . . . Nature proceeds from one type to another. . . . To seek for steppingstones across the gaps between is to seek in vain, forever.

Some Critical Thoughts on Socialism

I’ve got some material on socialism and am always looking for additional material to add to my opinionated gold. I’m also a Joe Rogan fan.  I was therefore delighted to find investor Naval Ravikat on the Joe Rogan show answering many pro-socialism arguments and arguments people who favor that political system. Here’s a synopsis of a few points he makes (video is available at https://www.youtube.com/watch?v=kGMJ61Phs2s)

I also found an article on the Washington Examiner web site that critiques Alexandria Ocasio Cortez’s idea of “public goods” – health care and public education supposedly two of them. I can understand why a socialist like her would want to argue this way. One conservative reply to confiscatory taxation often suggests that to take things from one person to give to another would be a form of theft if it is done for no other reason than to redistribute wealth or give some people free things. However, if things are common, then there can be no theft. How, then, could someone complain about giving somebody free education or health care if the items are “common”? The article is at https://www.washingtonexaminer.com/opinion/yes-alexandria-ocasio-cortezs-plans-are-about-giving-away-free-stuff

I had earlier picked up a copy of Thomas Dilorenzo’s The Problem with Socialism. It argues that socialism actually causes pollution, kills good medical care systems, and causes monopolies.  He also explains how Sweden’s socialism is not a successful example of that governmental system even though it is touted as such.


One of my favorite videos comes from the Four Horsemen who argue, that among other things, the money system is doctored to make investors become rich at the expense of poorer individuals. This would be an example of the crony capitalism to which Ravikat alludes to. It’s not capitalism that is a bad system so much as the way it’s manipulated to favor some people at the expense of others. The video is at https://www.youtube.com/watch?v=5fbvquHSPJU. I’d appreciate to hear someone’s comments on that video.

I also ran into an article on how David Brooks left his socialist ideas behind when he realized that the government officials he knew who claimed they could design and run an entire economy could not do so. In fact, nobody can, and efforts to do so only create injustices and inadequacies. The article is at https://hotair.com/archives/john-s-2/2019/12/06/david-brooks-socialist/ and here’s a quote from the article:

This is basically the argument that the invisible hand of the market is smarter than any planned system. Socialists don’t like that but it keeps proving to be true. But the best part of the piece is the next step. Brooks argues something that I’ve raised before: Socialism breeds corruption.

The argument that some people who think they can design something as complicated as an economy really can’t is an argument made also by Kevin Williamson in his book The Politically Incorrect Guide to Socialism.

Apparently, socialism is not a winning philosophy in Great Britain. The online news site Hot Air published an article on the overwhelming defeat of Jeremy Corbyn’s Labour Party. Corbyn ran as a Democratic Socialist. Article is at https://hotair.com/archives/john-s-2/2019/12/13/corbyns-loss-bad-news-sanders-warren-aoc/

In short, I would like to see DiLorenzo, Ravikat, Williamson, and Brooks engage Sanders and Ocasio Cortez over the merits (or lack thereof) of socialism. But that’s a pipe dream on my part.

Jeff
This blog is the creation of Jeff Stueber and named after his recent book The Vast Wastelands of Unbelief published by Tate Publishing. It covers the same type of material as the book: a critique of secular arguments whether from atheists, humanists, evolutionists or liberals. Jeff is a free lance writer who has been researching religious, philosophical, and political things for over fifteen years. Currently Jeff is member of the board of directors for the Lutheran Science Institute. His essays have been either published at or linked to by such notable pages as the revolt against evolution site (www.rae.org) and Tektonics Ministries (www.tektonics.org). In addition, Jeff has been published in a local writer's group yearly edition of Writer's on the Rock, several editions of the Lutheran Science newsletter, his local newspaper, the Watertown Daily Times, an issue of Tektonics Ministries e blog, and in issues of the Creation Research Society Quarterly. An essay of Jeff's has been published in Jerry Bergman and Doug Sharp's Persuaded by the Evidence. Jeff can be reached at jstueber@charter.net